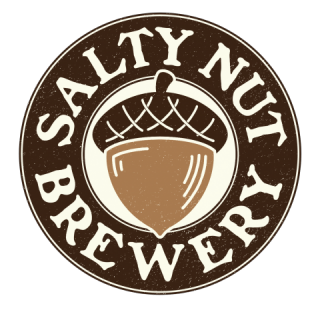 About two weeks before we opened back in April, Brent Cole and Jay Kissell of Salty Nut Brewery walked in OTBX to an empty store, well, make that a place that was starting to look sort of like a store.

I had never met either of them, but in they walked to wish us luck and ask a really interesting question.

I just about pulled a hamstring saying yes. Make a beer just for OTBX? Not only yes, but hell yes! Fast forward about 7 weeks and Chase and I were in the Salty Nut brewery watching a rolling boil of wort the color of a North Alabama sunset. The smell was incredible. A mix of earthy and rock candy tang. Then we got a smell of the hops that were soon to be added to the boil.

Brent and Chase, who had created the recipe for the beer, explained to me how hop-bursting works. A huge amount of hops is added late in the boil. The timing is important because this method provides that brilliant, sharp hoppy aroma, but not necessarily the high IBUs you’d have if this were done early in the boil.

Fast forward again to early July when we got our first sip of Miss Scarlett.

Chase and I were amazed. We’ve been around beer, very good beer, for a long time. We’re exposed to some of the world’s best brews every day. Miss Scarlett turned out so well I later told Brent and Jay that it was instantly in my top 5 beers I’d ever tasted. So balanced. So tasty and strong, yet friendly to the palate.

I ordered Miss Scarlett Red at the Salty Nut taproom. It came to me a clear copper with a beige head. The lacing was nice and thick.

I smelled caramel, grass, and baked bread. The taste is basically the same with a bit of pine thrown in. Not a big fan of hops, but like the character the hops add to this red.