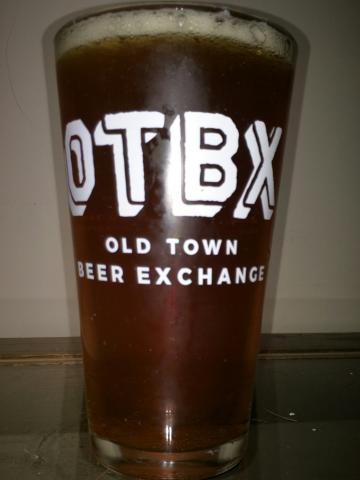 I arrived at Old Town Beer Exchange in downtown Huntsville eager to find a good beer to review. My malty sweet tooth was in control, so when I saw Florence's Singin' River had a doppelbock out, I immediately knew I would be taking a crowler of Orchestrator home with me.

Shortly after getting home, the crowler was popped open and the clear copper brew was poured into a glass. I may have been a bit timid with the pour but I expected a little bit more than the very thin cap which never quite melted away. It seemed to be mostly made up for the fact that it left plenty of white lacing on the glass.

I got a general sweet smell when I first brought the pint glass to my face. As I drank more, I could discern caramel and a bit of booze. I'm a bit disappointed by the lack of aroma. I decide to leave the crowler on the counter to warm up in hopes of eliciting a stronger aroma on my second glass. Sure enough, the aroma bloomed as it warmed. The caramel still dominated, but I started to pick up some vague dark fruit aromas (kinda plum-ish) along with a char affectation to the caramel sweetness. The warming definitely helped. It wasn't a night and day difference, though. The second glass seemed like a more fuller experience.

When I take a drink of Orchestrator, I get a mouthful of caramel and molasses, kept from becoming cloying by the breadiness and a bit of an herbal finish. The sweetness from the malt intertwines the light caramel with the dark of molasses in such a well-balanced way. The taste is so rich, it makes me annoyed with how tame the aroma was when I first started drinking. This has heft without causing me to regret when I chug a bit more than I probably should. It wants me to take my time but is forgiving when I increase my intake past a casual drink.

According to the 2015 Brewer Judge Certification Program (BJCP), a doppelbock should fit within the following parameters:
Overall Impression: A strong, rich, and very malty German lager that can have both pale and dark variants. The darker versions have more richly-developed, deeper malt flavors, while the paler versions have slightly more hops and dryness.
This dark doppelbock seems to fit the rich and very malty description.

The aroma for dark versions are supposed to exhibit "Maillard products" (basically, the sugars get a caramelized character) and toasty notes, but some light caramel is acceptable. Hop aroma isn't expected in the dark doppelbock, dark fruit aspects are optional, and while chocolate aromas are fine, the guidelines do indicate that it shouldn't smell roasted or charred. Okay, so Orchestrator seems to fit the aroma profile, although possibly being a bit more on the caramel side than the darker molasses side. I wish I could resmell it after reading this as that my wording of the caramel getting a "char affectation" could fit into the Maillard category or the roasted.

Singin' River's doppelbock fits the standard appearance of the dark variant with a clear appearance and a ruby tint to the beer.

The BJCP states: Most versions are fairly malty-sweet, but should have an impression of attenuation. The sweetness from low hopping, not from incomplete fermentation. This example seems to fit that description and follows the notes on Maillard products also expected in the flavor as well as aroma.

A doppelbock is supposed to have a medium-full to full body, moderate to moderately-low carbonation, and should be very smooth. I think Orchestrator only differs in the body. I would characterize what I drank as closer to medium and medium-full.

The most complex profile of the beers I've sampled from Singin' River. By far, my favorite beer of theirs. That said, I'm not trying to memorize a need to remember this brew next year to ensure I get it. I will return to it with a favorable opinion, but no drive to hunt this down to drink again.

Singin' River Orchestrator
Brewer:
Singin' River Brewing Co.
Doppelbock
ABV: 8.20% ABV Store/Serve Temperature: close to 55 degrees F
Read Beer Entry
Comment count: 0
Ziggyzoggy.com uses cookies on this site to help us improve experiences for our visitors. You may delete and block cookies from this website via your browser or other software. By using this website or closing this message you consent to our use of cookies (see Privacy Policy).