A traditional German variation on the Rye Beer, this style uses a large portion of rye malt, and was popular in German before the 15th century (when the German Purity Laws allowed only water, barley, and hops in beer production).

Ranging in color from light to dark brown, this beer generally has low hop aroma, flavor, and bitterness. This allows the spicy and slightly sour rye character to be prominent, along with other pale and wheat malt aromas and flavors. Often bottle conditioned and cloudy in appearance.

Best served cool, at 46-54 degrees, and in a stemmed tulip, pint glass, or beer mug. 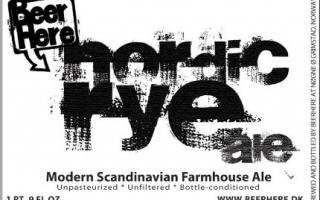 In 2007 beer- and whiskey pioneer Michael Jackson and Beerhere founder Christian Skovdal Andersen met to discuss how to make a beer similar to the traditional strong ales that was brewed for special occasions on the Danish farms before industrialization.