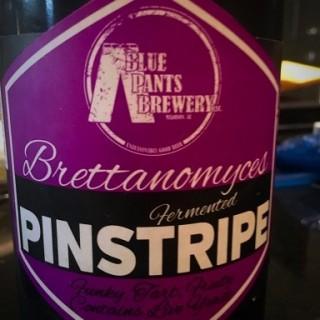 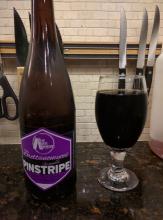 Many breweries have one beer they brew that is always the subject of experimentation. Sure, it is possible to get the normal version of this beer, but you are far more likely to find the marshmallow or peanut butter or grapefruit or some other Frankenstein deviation from the norm that the brewers think up. For Madison, Alabama's Blue Pants Brewery, their Pinstripe stout is the beer which they seem to constantly be releasing a new variation. It seems that it was probably just a matter of time that the recent trend of brewers playing around with Brettanomyces (aka "Brett") that Blue Pants put Brett and Pinstripe together.

Brettanomyces Fermented Pinstripe stout poured out motor oil black with a tan cap that disappeared nearly as fast as it appeared at the end of my pour. No lacing or sign of bubbles other than some ripples on the surface of the beer.

Smells of grape juice to me. Not getting any aromas that I can identify as belonging to a stout. The sweetness of the grape juice smell is tamed a little by a sour funk that comes after the initial rush.

Roasted flavors are there when I take a drink. I get alternately dark chocolate or coffee flavors. The strong grape smell is more of a cherry-like dark fruits on the flavor. There is an interesting interplay between the sweet fruitiness and the roasted malt.

If you like wild beers, old ales, quads, or are a Blue Pants Pinstripe fan who wants to try all of the varieties, you should buy a bottle. If you aren't in that crowd, then maybe this beer isn't for you. Buy it only if you are willing to try something a bit odd.